New technologies have transformed music. Today almost everyone can create music from home. To start creating, you only need a computer and specific software. In the past, people who wanted to produce or record music needed to rent a recording studio and a team of professionals for many hours. This was too expensive and was not available for everyone. Nowadays, if you have a computer, you already have everything you need to get a greatest hit! In a few clicks you will have ready the central part of a home studio, known as a digital audio workstation or DAW (Digital Audio WorkStation).

Among the most popular DAWs for music creation and production are CUBASE, AppleLogic X Pro or Pro-Tools among others … Only with a PC and a DAW we can start creating music based on MIDI digital instruments (Music Instrument Digital Interface) or VST plugins (Virtual Studio Technology) but if we have some musical knowledge and want to record the sound of our favorite instrument or our own voice, we will also need a sound card or low-latency audio interface, it will allow us to connect microphones or musical instruments and record them on the workstation with very low latency and (almost) professional quality. 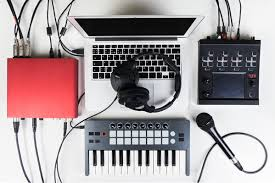 Technology has also transformed the musical language. Traditionally, music was written on sheet music, but in the digital world the language of music is called MIDI (Musical Instrument Digital Interface). MIDI language allows computers and programs to understand the information that comes to them from peripherals such as a keyboard midi, a guitar pedalboard, etc… it is quite common to find a midi keyboard in almost all the home studios, that keyboard does not sound by itself, but with it, we can convert sounds into MIDI language: when we press a key a MIDI note is created, notes that will be played later (or in real-time) on the instrument we choose from our favorite sound bank, being able to choose from a grand piano, a string quartet or the most exotic instruments that you can imagine. In the same way, the MIDI editor of your DAW allows you to sequence the notes step by step and that makes the task of creating music much easier for people without previous musical knowledge. Of course, having musical training and culture will allow you to give better compositions, as long as the muses visit you… or maybe, as the genius said: A masterpiece consists of 1% inspiration and 99% transpiration… What do you think?

You can find out more about which cookies we are using or switch them off in settings.

This website uses cookies so that we can provide you with the best user experience possible. Cookie information is stored in your browser and performs functions such as recognising you when you return to our website and helping our team to understand which sections of the website you find most interesting and useful.

Strictly Necessary Cookie should be enabled at all times so that we can save your preferences for cookie settings.

If you disable this cookie, we will not be able to save your preferences. This means that every time you visit this website you will need to enable or disable cookies again.